The Uganda National Bureau of Standards (UNBS) has dismissed reports of the existence of artificial eggs on the Ugandan market.

According to UNBS, the products referred to in the article were sweets in packages that looked like egg shells but clearly labeled as Funny Toys. UNBS explains that apart from the appearance of the package, the product did not contain any features meant to mislead the public into believing that they are actual eggs.

Godwin Bonge Muhwezi, the Head of Public Relations at UNBS says that UNBS intervention, from which the media report emerged, was due to suspected tampering with expiry dates and labels in Chinese language in violation of the standard for labeling pre-packaged foods.

“We have not received complaints or come across cases of fake eggs on the market. However, as a statutory body with a mandate to enforce standards to protect the health and safety of consumers and the environment against dangerous substandard products, we would like to urge any person with information that can help us in our investigations to report on our toll free line: 0800133133,” Muhwezi said in a statement. 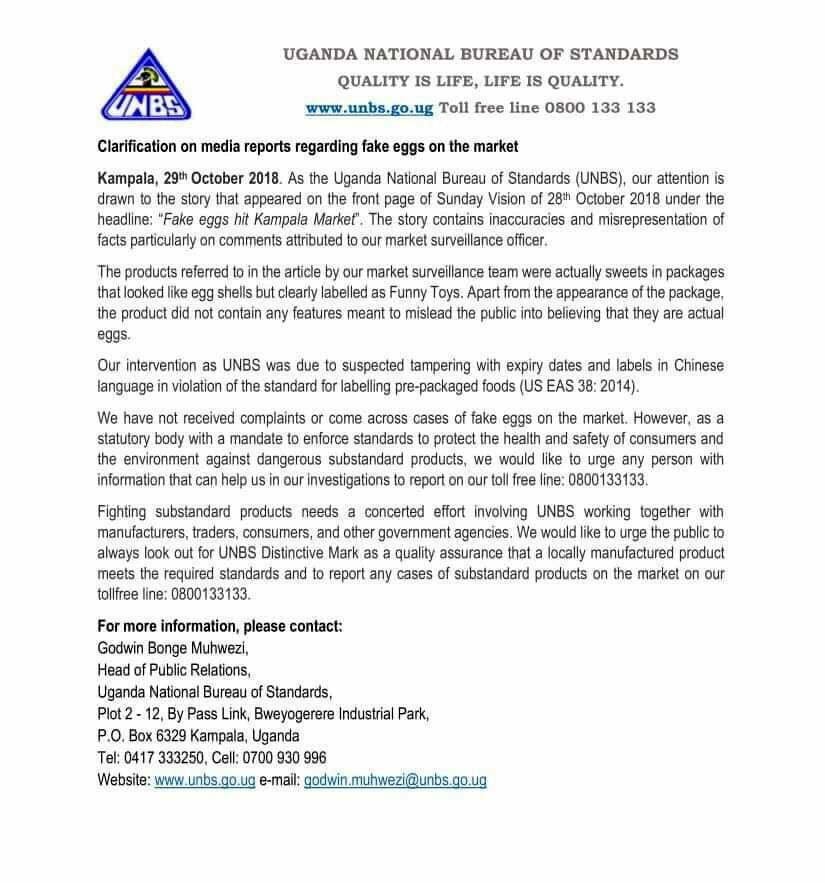 The emergence of ‘fake eggs’ was first reported in china in 2004 and in Malaysia in 2011. An online search shows that fake eggs are made from chemicals, gels and additives. The egg shells are made from paraffin wax, gypsum powder and calcium carbonate while the egg yolk and white were made from sodium alginate, gelatin, alum, benzoic acid, calcium chloride, water and lemon yellow food coloring.

It is further indicated that the yolk of the fake egg was more yellowish, and had no signs of chalazae, the opaque ropes of egg white holding the yolk. When shaken, the fake egg will produce the sound of liquid because the water inside does not gel together with the solidifying agent.

UNBS to enforce standards of face masks and face shields