Kampala, Uganda | URN | There was panic and fear in Kikulu zone in Kikaya-Kisaasi in Kawempe North on Saturday 8th night following multiple explosions of gas cylinders. Locals told this publication that they heard a loud bang followed by ablaze that engulfed the entire structure that housed the cylinders.

The explosion happened minutes to 9.30PM in the premises belonging to the LC I Chairperson, Ismail Bukenya Musisi. Albert Mande, a retired Local Defense Unit (LDU) officer and resident, says the fire started from a charcoal stove in the neighborhood. Mande says immediately the cylinders went off, it was followed by a series of flashes.

He says with the huge bang, all the people in the area fled the scene from the fiery smoke and dust. “As a trained person, I knew this was a sound of a gas cylinder. I was at the house next to the scene and I immediately knew it was the cylinders because I knew they had a tenant who had a store here,” says Monde.

After minutes into the explosion, several residents arrived at the scene to put out the fire and rescue some of the property. “We started breaking glasses of the vehicles that were parked in the area to push them away from the scene. We knew that the gas explosion would have irreparable damage had the fire extended to the vehicles,” said Mande. 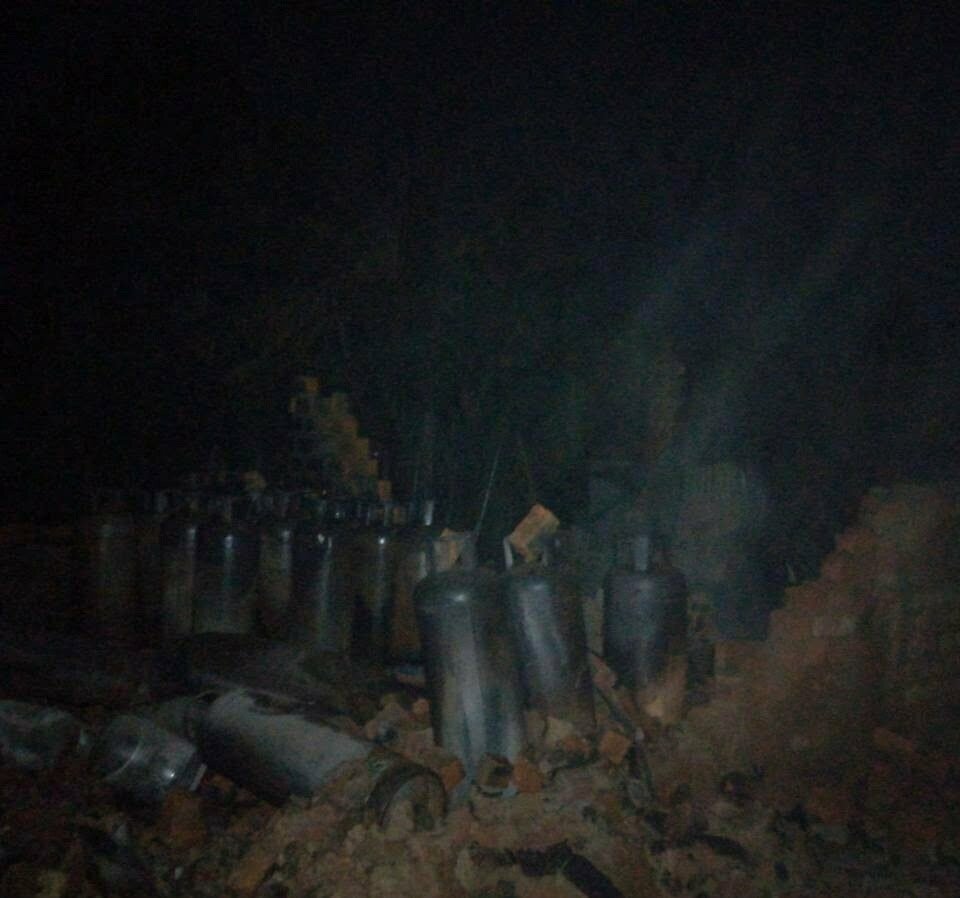 “On arrival here, we found a situation that the cylinders were exploding and our fire fighters managed to swing into action and contained the fire,” ASP Okobo disclosed to this publication. According Okobo, 38 Gas Cylinders weighing between 40-46 kilograms and several others weighing 12 kilograms were saved before they exploded.

He says the fire razed down the store that housed the cylinders burying some of them.

While locals say the fire started from a charcoal stove, the Police fire brigade couldn’t confirm the claim by the time they left the scene. “We have not established the cause of the fire for the reason that we have not been able to interview the person who was using that store. They told us that by the time the fire started, he was already out of this place. Until now, he has not arrived,” says Okobo.

Police has sent the Bomb Squad unit to carryout extensive investigations at the scene today.

According to Okobo, the fire rescue Police handed over the scene to the area police to secure it for the specialized bomb squad team.

With a closer look at the scene, the gas cylinders were being kept in a boys’ quarter behind the main house, with several other accommodation units packed in the area.

Attached to the cylinder store, was a makeshift iron sheet structure, which appeared like a workshop and parking areas. Compressed gases can be toxic, flammable, oxidizing, corrosive, inert, or some combination of these hazards, this is according to their Standard Operating Procedures guiding their usage.

Police says in addition to the chemical hazards, the amount of energy resulting from the compression of the gas makes a compressed gas cylinder a potential rocket. “We need to know that cylinders are very dangerous and you should always procure cylinders from reputable dealers. They must always be taken for refilling and when their expiry time has reached they are supposed to be re-assessed if they are confirmed not to be reusable, they are supposed to be destroyed,” Kobo says.

He says it is criminal for one to handle gas cylinders to such magnitude in a residential area.

Latif Ssebagala, the Kawempe North MP and resident of the area, says the blast occurred when he was at his Kisaasi College School, a few meters from the scene.

He rushed to the scene to see what had happened and witnessed residents pushing cars that were parked in the area. According to Ssebagala, the parking area is often used for weddings and other functions.

Another suspected terrorist shot dead in Kampala during escape

After issuing an order to have all Home Bet and Game Bet branches across the …..READ MORE