According to a statement released by Airbus on Wednesday evening, Uganda Airlines, the national carrier of Uganda, has signed a memorandum of understanding for two A330-800neo, the new version of the best-selling A330 widebody airliner, featuring new wings new Rolls-Royce’s latest-generation Trent 7000 engines, new systems and a new Airspace cabin interior.

The agreement was announced at Farnborough airshow by Ephraim Bagenda, the CEO of Uganda Airlines and Eric Schulz, Airbus’ Chief Commercial Officer.

Uganda Airlines plans to use the A330-800neos to build its international long-haul network with the aircraft offering cutting-edge technologies along with most efficient operations. The aircraft will feature a three-class cabin layout comprising 20 Business, 28 Premium Economy and 213 Economy seats.

“We are delighted to welcome Uganda Airlines among our A330neo customers, the A330neo will bring a range of benefits offering unrivalled efficiencies combined with the most modern cabin. We look forward to see the A330-800neo flying in the colours of Uganda”, said Eric Schulz, Airbus Chief Commercial Officer.

This is the second procurement agreement that Uganda signed.

Earlier on Wednesday, Canadian plane manufacturer Bombardier announced that it has signed a purchase agreement with Uganda for four CRJ900 aircrafts.

Uganda National Airlines Company signed an order for four new CRJ900 regional jets with Bombardier Commercial Aircraft, as part of the much-anticipated plan for the revival of Uganda Airlines.

Uganda Airlines was liquidated in 2001, after 24 years of operation. The revived airline will be the first carrier to operate the new CRJ-series Atmosphere cabin in Africa. The airline will operate the CRJ900 in dual-class configuration with 76 seats, including 12 first class seats, according to a press release issued this afternoon.

Based on the list price for the CRJ-900 aircraft, the firm order is valued at approximately USD 190 million (710 billion Shillings).

“We congratulate the Government of Uganda for the revival of its national flag carrier, and are thrilled that the new airline has selected Bombardier and the CRJ900 regional jets for its upcoming debut,” said Jean-Paul Boutibou, Vice President, Sales, Middle-East and Africa, Bombardier Commercial Aircraft.

Jean Paul says the CRJ series aircraft recognized for its superior economics and efficiency, has enabled airlines worldwide to serve communities with better connectivity, and they look forward to supporting the development of Uganda’s regional air travel with these CRJ900 regional jets.

Ephraim Bagenda, the Chief Executive Officer (CEO) of Uganda National Airlines says they are confident that the CRJ900 aircraft will help Uganda succeed looking at its track record.

“We are delighted to have ordered the world’s leading regional jet, and we look forward to providing the most modern passenger experience in regional aviation to the people of Uganda and across Africa,” is quoted by Bombardier. 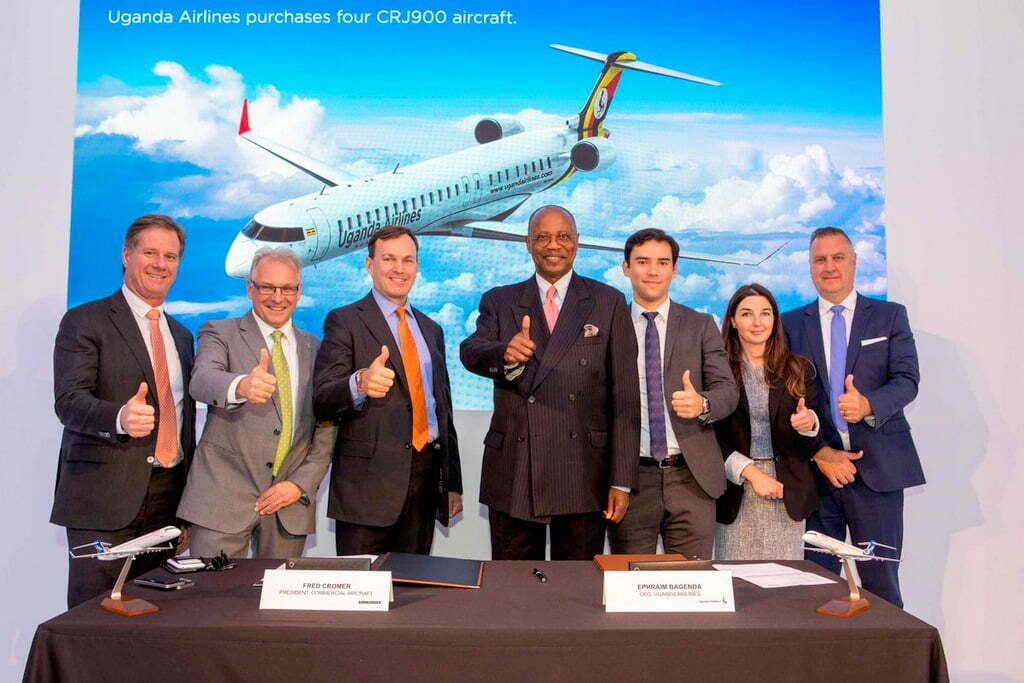 ATMOSPHÈRE cabin design allows passengers to carry and store an “oversized” roller bag within the aircraft cabin bins which minimizes the need to check bags at the counter or the gate.

Early this month, cabinet concluded the essentials of reviving the airline. Addressing the media on July 3rd 2018, the State Minister for Finance, David Bahati said cabinet had given the Transport Ministry green light to actualize the revival project.

Government budgeted 139 billion Shillings to revamp the airline in the 2018/19 financial year. Government needs at least Shillings 1.3 trillion to purchase 6 aircraft as intended. Bahati said government is in talks with some financiers.

“We are looking at different possibilities including the EXIM banks of different countries. I think you’re all excited about this project,” he said.

Revamping Uganda Airlines was atop President Yoweri Museveni’s must-do list after the 2016 presidential elections. During the Inauguration of cabinet in October 2016, Museveni directed the line ministry to commence work on the task.

Museveni argued that “a national airline would help the country save US$420 million per year that Ugandans spend on travel. The national airline will also create jobs and career opportunities for children who train as pilots at Soroti Flying School,” he said.

The government has, in a remarkable snap, allegedly regained the full ownership of Uganda Airlines …..READ MORE