The trekkers went through Nakaseke, Mityana, Kiboga, Kasanda and Mubende district up to Birembo in Kakumiro district. Birembo, which is found is South of the capital is where NRA rebels faced one of the fiercest battles in their fight to overthrow, President Apollo Milton Obote.

The trekkers covered 28 km per day and broke off in the evening over a bonfire at eight campsites to remind Ugandans of the heroic exertions of the freedom fighters who volunteered to liberate the country out of patriotism. During the trek, Museveni and the veterans addressed the trekkers at the eight campsites about Uganda’s liberation journey as well narrating the roles played by The Front for National Salvation-FRONASA and National Resistance Movement (NRM).

Addressing the trekkers and other government officials at Birembo war memorial grounds on Friday 10th evening in Kakumiro, Museveni asked Ugandans to live in harmony and avoid religious sectarianism, tribalism and gender discrimination, saying all these cannot help transforming the country but rather fan hatred and deter development.

Museveni further urged Ugandans to have respect for God, saying the fear of the Lord is the beginning of wisdom. He says it is because of the fear and respect for God that is why he has been able to lead the country for the past 30 years and defeated enemies. He called onto Ugandans to advocate for peace and unity to cause transformation and remarkable prosperity in the country.

He explained that the trek has enabled him to get the chance to bond directly with the fighters who took part in the 1981-86 bush war, adding that through the trek he has been able to reach out to the beneficiaries. According to the president, by walking he directly checked on his system and got the opportunity of reaching and getting his contacts along the way.

Museveni says the information he obtained from the 6-day trek will help him sort things that have gone wrong under his regime. The president further explained that the trek enabled him to assess the situation of several feeder roads, which he said the district local governments should labour to work on and maintain since government has equipped them with road equipment.

Museveni also challenged the people of Bunyoro sub region to take advantage of the oil discovery and the available infrastructure established by government to tap in available opportunities to cause social economic transformation in their areas.

He further warned medical workers in government health facilities who deny or sale drugs to Ugandans seeking medical attention to stop, saying he is exploring modalities on how they can be trapped, arrested and charged accordingly.

Gen. Joram Mugume, who represented the Bush war veterans, says the trek has enabled the veterans to reunite and retrace their routes, adding that it is vital to commemorate the heroic sacrifices of Uganda’s freedom fighters. He called on Ugandans to always respect the freedom fighters for the efforts they made to liberate the country, saying their services must be appreciated forever. 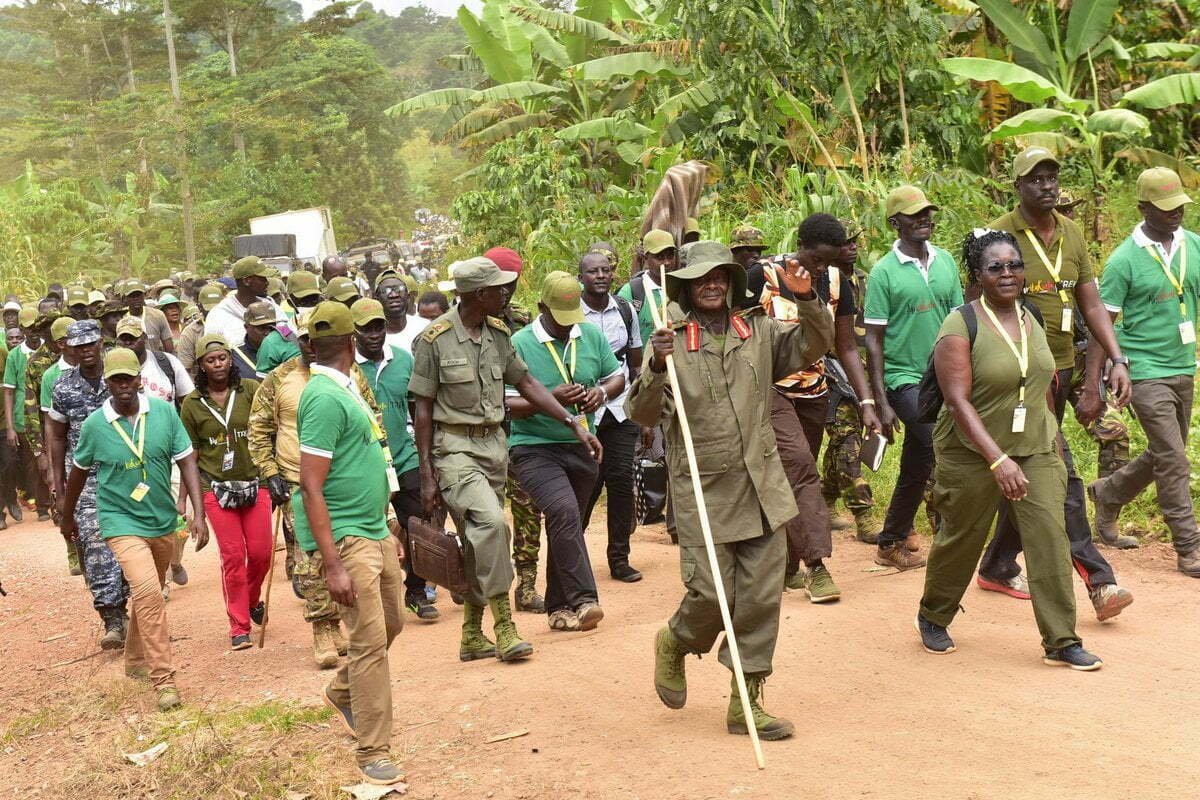 Gen. Mugume also applauded the people of Bunyoro for the support they offered to the NRA veterans during the struggle to liberate the country.

Alice Kaboyo, the head of the NRA archives unit said the Trek was very crucial for the education of Ugandans. President Museveni fondly described as the Bazzukulu, adding that the foot slogging gave the trekkers a hint of what the freedom fighters endured as they liberated the country. She said the trek will culminate into the building of a historic NRA museum at Kanyara in Nakaseke district.

Read Also: A brief history of the NRM

Fred Bainomugisha, a youth from Bushenyi district, who participated in the trek, says it is during the 6-day long trek that he came to realize that the bush war fighters went through a lot of huddles adding that their services need to be highly recognized. The Trek was organized by the NRA archives unit led by senior Presidential advisor/NRA, Alice Kaboyo.

President Museveni last made such a trek between January 3 -11, 1999, walking 200km to retrace NRA guerrilla bases in the Luweero Triangle. The 1999 trek was commemorating the successful attack on Kabamba barracks on January 1, 1985 by NRA fighters led by Gen. Salim Saleh.

The attack on Kabamba climaxed with the battle of Birembo on January 10, 1985, where the then guerrillas defeated government soldiers. The walk came a month after the president led an anti-corruption walk through the capital in a move derided by critics who said the corruption took place under his government.